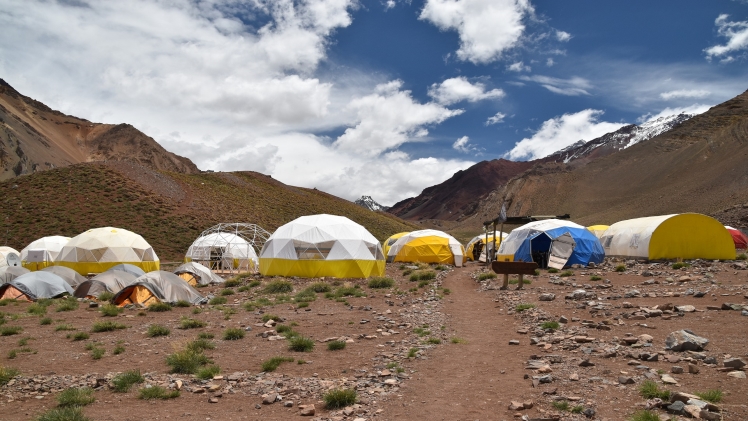 Aconcagua Climbing – Anthology of My Expedition to Aconcagua

Five years earlier, on the same Aconcagua climb and by the same route, he had not reached the summit at the same point in La Canaleta. On that occasion, crampon and double boot problems made me recoil with two frozen fingers. This cost me two months of treatment in Ribeirão Preto, where the specialist doctors only knew about cold beer.

However, the dream of ascending to the highest point in the Americas was rekindled. In 1998 and 2000, the projects to return to the Cordillera never left the newspaper, either for lack of sponsorship or family reasons. In 2001, however, I made a more thorough preparation to successfully attempt to climb Aconcagua. Physical training was intensified, including participation in the São Paulo Marathon and the Santos Triathlon. On weekends, walks and excursions in Delfinópolis, Poços de Caldas and Campos do Jordão. During the week, jogging, swimming, and lots of weight training in the gym under the guidance of a personal trainer.

The fact is that last December, I was prepared for the most significant physical and psychological challenge of my life: the ascent of Aconcagua from the Plaza de Mulas. I traveled from São Paulo, by plane, on December 26, to Mendoza, at the foot of the Cordillera, where I had to pay a fee of US 200 to access Aconcagua Park. The next day, I continued 170 km by bus to Puente del Inca, at an altitude of 2,700 meters, starting the journey on foot to the base camp. After two days of pre-acclimatization, I walked to Confluencia, 3,200 meters above sea level. On December 31, I continued to the 4,300 meters of Plaza de Mulas, where I had a unique New Year’s Eve. There I stayed in the refuge for more than a week, doing various acclimatization tests, Aconcagua hike, including two trips to the Nido de Cóndores and the conquest of Pico do Bonete, at 5,000 meters.

When I returned from my frustrated attack on January 8, I decided to leave the mountain and return home. Discouraged and tired, he longed for the quiet of home. But a good night’s sleep and nutritious breakfast, in addition to the insistence of the Brazilians present at base camp, made me choose to take the risk once again.

On Saturday, January 12, I felt that things could be different than the previous two attempts. We left the tents at 6:30 am amid solid winds, which would accompany me throughout the day. In little more than an hour, Darius and I had distanced ourselves from the others and climbed the mountain, passing the shelters of Berlin and Independence. At the Crossroads, the biggest obstacle: the winds intensified, whipping us at a speed of up to 100km / h, creating a thermal sensation of -30o Celsius and raising asymmetrical snow dust that clogs our lungs. Cornered, by suffocation and by running, we defied the fury of the height and insolently entered the Canaleta.

Places to visit in Cancún

Combine Your Egypt Tours With a Nile Cruise