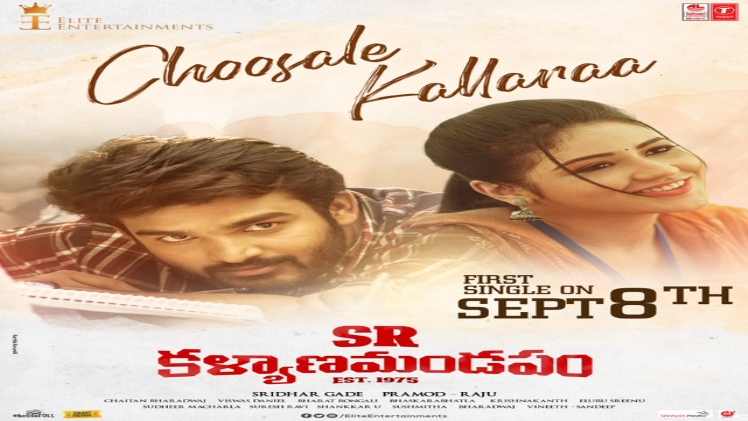 Young Talented Hero Kiran Abbavaram, who introduced himself to the Telugu film industry with his film ‘Rajavaru Ranigaru’ and impressed the audience and critics with his first film, is now coming up with an innovative film called SR Kalyana Mandapam ESTD 1975.

Producers Pramod and Raju said that the title and first looks of the film, which has been released so far, have received a special response from audiences from all walks of life. In this context, the lyrics written by renowned lyricist Krishna Kant, tunes composed by film music director Chaitan Bharadwaj (RX100 Fame) and star singer Sid Shriram’s voice, the song is sure to captivate the audience. Leading music company Lahari Audio announced on September 8 that the song would be released on their official music streaming platforms and YouTube channel.

Producers Pramod and Raju are producing the film with the highest standard production values ​​under the banner of “Elite Entertainments”. Also in this movie, Kiran Abbavaram is playing the role of Taxiwala Fame Priyanka Jawalkar as the heroine. Sridhar Gade, the director of the film, said that the filming of key scenes in the surrounding areas of Rayachoti was completed by the time the lock-down was imposed. With this film, Sridhar is getting introduced to the Telugu screen as a director.

Priyanka Jawalkar – SR Kalyana Mandapam ESTD 1975 Movie and ‘Choosale Kallaraa’ is the female lead character of the song. He entered the Telugu film industry in 2016. So far he has acted in only 3 movies. And his upcoming movie SR Kalyana Mandapam ESTD 1975’s Choosale Kallanaa song is going to be released on 8th September. He is a familiar face to everyone from his movie Taxiwala. At this moment, mlsbd is the most popular pirated site where you can get millions of videos for free.